For CareerBuilder, HR Tech 2015 would be one of the most important trade shows of the year. The firm wanted to use the world’s largest Expo of HR technology products and services to showcase their line of comprehensive and user-friendly HR software. In addition, a totally new “look and feel” would be making its debut at the event thanks to the recent corporate rebranding.

At DesignCentrix, we’ve had a partnership with CareerBuilder for almost nine years. Three months from the show opening, they reached out to us to brainstorm their HR Tech goals, budget and timeline. 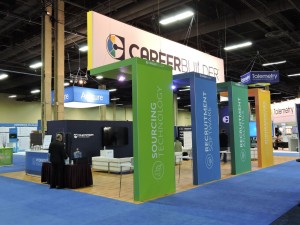 CareerBuilder planned to make software demonstrations the main focus of the exhibit, with the objective of reaching 500 demos/leads during the show. Achievement of that goal became a vital component during the booth layout and design phase. The new “look and feel” was also a major consideration, making sure CareerBuilder’s new brand was presented correctly and all materials were consistent across the board.

DesignCentrix soon presented inspiration boards based on CareerBuilder’s needs, and they were thrilled with our approach to their 30’ x 50’ exhibit.

The exhibit design was sleek and new, with passageways that allowed attendees to easily enter, find their way to one of four demo stations, and depart smoothly to make way for others to enter. The creative vision was discussed and tweaked and the building soon began.

Starting at the gracefully curved greeting desk, instructions on the graphic panels guided the flow of visitors to the four demonstration stations. Free standing and each a different color, the stations featured integrated lighting and electronics and suspended ceilings with graphics that reflected their subject matter 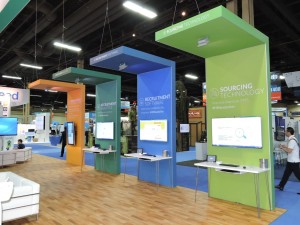 When finished and assembled on the show floor, the exhibit was not only stunning…it was incredibly effective as well. CareerBuilder exceeded its goal of 500 demos/leads and met with many more prospective clients.

And the experience? “DesignCentrix understands me, our business and the way I like things done,” said Traci Saliterman, Experiential Marketing Manager for CareerBuilder. “They take the time to listen – and come up with solutions to meet our needs.”

“They are also just genuinely good people. You can’t say that about a lot of vendors – they have become close friends over the years.”